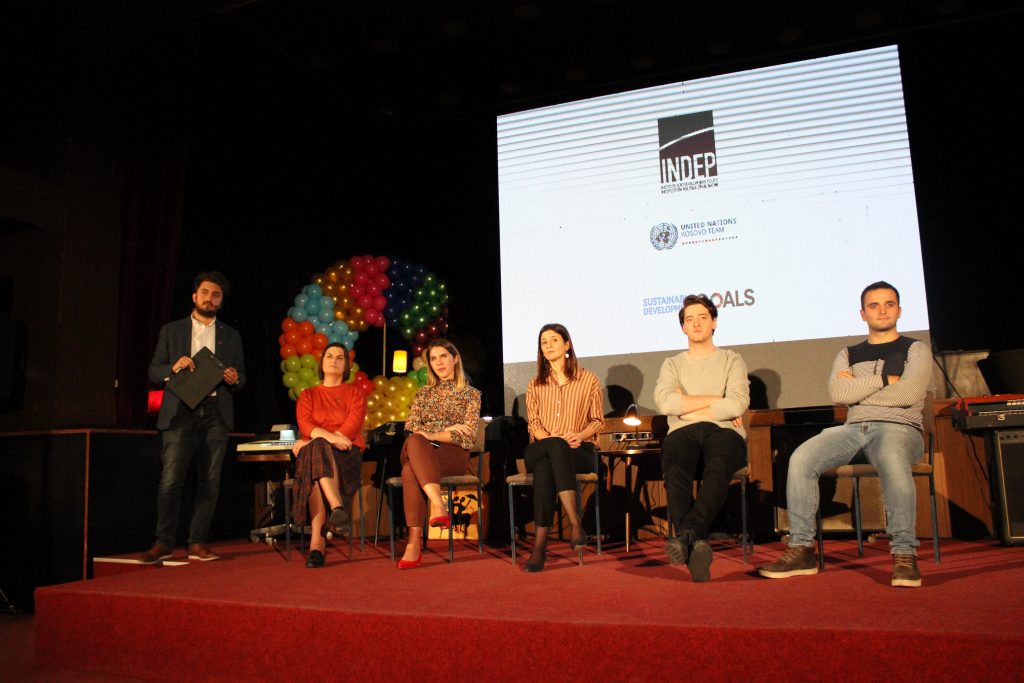 The event was opened with the launch of an air pollution awareness video campaign in Kosovo, which included raising awareness messages from public figures, ordinary citizens and marginalized groups. Further on, a quiz that assessed the audience’s general knowledge of the Sustainable Development Goals (MDGs) and the 2030 Agenda in general was held.

In her opening remarks, Mrs. Isme Humolli from the World Health Organization (WHO) provided some figures regarding the negative impact of polluted air on the health of Kosovo citizens. She emphasized that the average life expectancy of our citizens is approximately 11 years lower than that of the European Union citizens, specifically because Kosovo has the most polluted air among European countries. In the end of her presentation Mrs. Humolli called for increased awareness and cooperation between all stakeholders and citizens.

The next speaker, executive director of INDEP, Mr. Burim Ejupi evaluated as very positive the fact that air pollution is already being discussed very often among institutions and citizens, because air pollution is a factor that affects the overall health of citizens and every one of us on daily basis. Mr. Ejupi highlighted that the forthcoming Government should have a concrete plan on the implementation of the 2030 Agenda, taking into account the recommendations made by local NGOs profiled in sustainable development, including here INDEP. As a concrete step, Mr. Ejupi imposed the excise tax on diesel since it is a commonly known fact that the latter is one of the most polluted contributors in the pollution that comes from transport.

Researchers from NGOs, Learta Hollaj from INDEP and Elion Gerguri from the Balkan Green Foundation (BGF), gave a joint presentation on the current state of the air in Kosovo as well as presented possible ways how all of us can contribute to improve this situation. They provided figures regarding the situation, one of them being that 3,800 premature deaths occurred in Kosovo until 2016 as a result of air pollution. The main causes of these deaths are estimated to be multiple crusaders, production plants and power plants Kosovo A and Kosovo B.

From the United Nations Development Program (UNDP), Mr. Arblir Pireva, presented some of the findings of the project ‘Healthier Kosovo’. Mr. Pireva said that although the situation is bad and alarming on the ground, 69% of citizens, according to UNDP figures, are willing to join initiatives in solving environmental problems. On the other hand, UNICEF representative Ms. Dafina Mucaj spoke in details about the importance of air quality in the early development of children. Mrs. Mucaj presented a short video created by the UNICEF team, which illustrated how the brains of children develop in polluted air versus those in clean air. In the end, Mrs. Mucaj called for reliance in renewable sources when it comes to energy production, as they minimize the negative effects on public health.

The event was closed with a panel consisting of all the pre-speakers who answered questions posed by the audience.